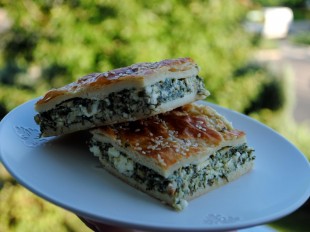 In a large bowl grate the feta cheese, the parmesan and the cheddar. Add a pinch of pepper and some dried oregano. Fry the pine nuts in a pan for a few minutes until they are light golden and put them over the cheese mixture.

Heat the olive oil together with the butter in a deep pan and sauté the green onions until tender. Add the dill and after a few minutes add the spinach and stir well. Cook the spinach until it becomes thick and put it over the cheese mixture.

Beat 3 eggs in a separate bowl and put them over the spinach. Mix the whole composition and gate in some nutmeg.

Grease a pan with butter and place first layer of dough. Pour the spinach mixture over it and put the second layer of dough. With a knife make small notches on the surface of the dough to form little squares – this can be useful for portioning.

Beat an egg in a bowl and using a brush spread it all over the pie.

Place the pie in preheated oven at 200 C and bake for 35 – 45 minutes. After about 20 minutes, remove the pie from the oven and, using a brush, coat the layer of pastry with some milk and sprinkle over the sesame seeds, and put it back in the oven.

This pie is very similar to the Greek recipe for Spanakopita , slightly adapted to my taste. Can be served hot or cold! 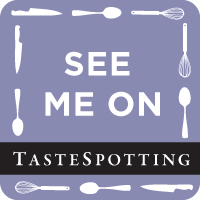